Per our tradition, we spent some time in Colorado this winter.  This year we chose to drive to Colorado on Christmas Day and stayed for almost two weeks.

Once again, snow was pretty elusive on our trip.  Pine had a few inches of snow a couple days before we arrived, but we didn’t have any additional snow during our trip.  It was also unusually mild!  Since Texas was extra cold, it was actually colder at home than it was in Pine for most of our time up there!

Despite a lack of fresh snow, the kids had a great time with Oma and Opa!  There was enough snow for sledding on the back hill — now that the kids are getting bigger and more confident, they do a better job steering. 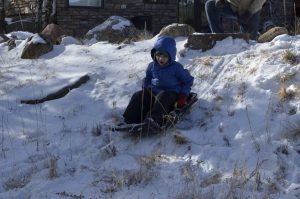 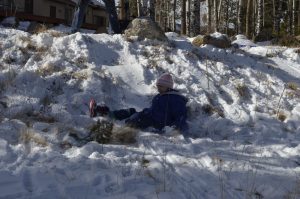 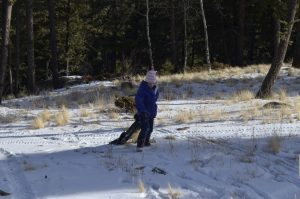 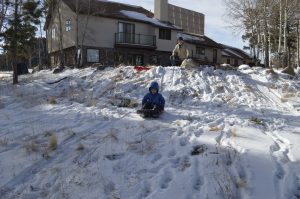 There was enough snow lying here and there for the kids to tromp through it, pile it up, and shovel it around. 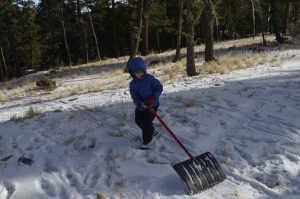 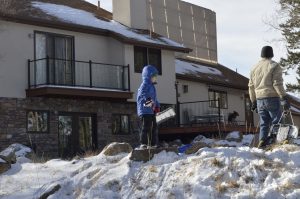 One afternoon, Oma, the kids, and I went down to Denver.  We started at the Natural History Museum and explored there for a few hours.  Next we grabbed dinner and then went to the Zoo Lights display at the Denver Zoo.  The kids loved all the creative animal displays and Kamy even got to ride on the carousel.  It was cold though! 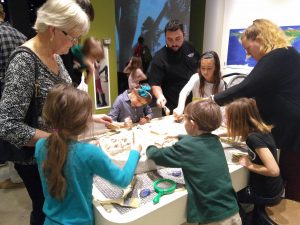 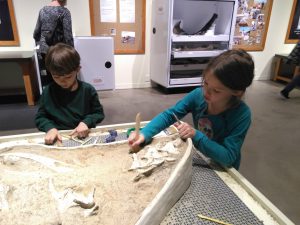 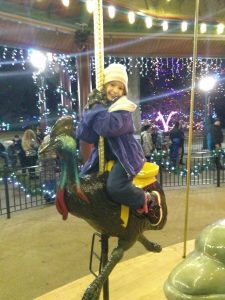 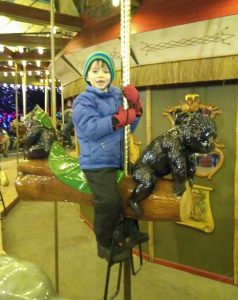 Kamy has been persistently saying she wants a horse.  I told her that we definitely would not be getting a horse until she had at least ridden one.  That seemed reasonable.  😉  Oma arranged for permission for the kids to ride a sweet little pony at her barn named Patches.  The kids did awesome!  Both Kamy and Caden were willing to try new things and loved Patches.  The first trip to the barn everyone walked and did a little trotting.  The second trip was mostly trotting.  And the third trip even included a touch of canter for each kid (though they both thought canter was a bit much)! 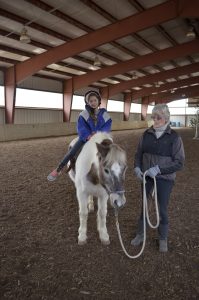 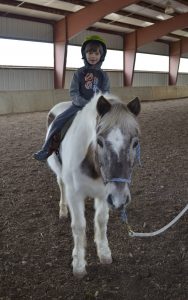 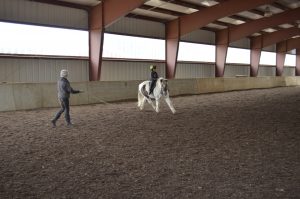 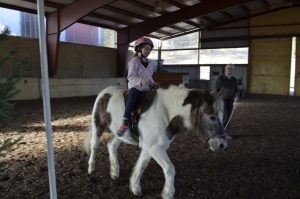 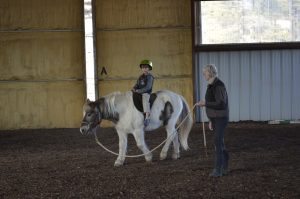 Another friend of Oma’s allowed the kids to ride their larger horse — Joker.  Oma also let them walk on Cappi once he got his extra energy worked off.  Kamy decided Patches was a much better size for her.  =)  The kids loved brushing him, feeding him carrots, and leading him to and from the barn. 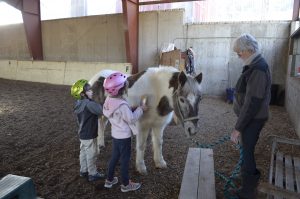 All that to say, both kids loved the experience and hope to ride Patches again next time we visit Colorado.  And yes, Kamy still wants a horse.  LOL

Another afternoon, Oma, Opa, the kids, and I drove up to Breckenridge.  It was super windy on the drive, but otherwise we had nice weather.  The kids went sledding on the hill in town and had a great time!

Up at the Breckenridge Resort, we all went swimming.  Caden and Kamy both went down the slide into the pool by themselves this time!  Caden is becoming a little fish and didn’t even need Opa to catch him at the bottom.  Kamy wanted to be caught, but she was much less concerned about keeping her head above the water.  The pool water was a bit chilly for me, but it’s hard to turn down the hot tub! 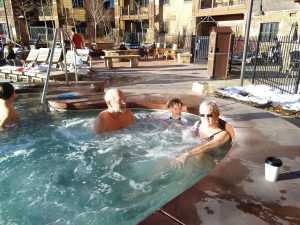 Back at the house, the kids played lots and lots of games with Oma.  WordCrossing and Blokus were the most popular games this trip.  We also taught the kids how to play Zilch!  Both kids are pretty aggressive players — sometimes that works out, and sometimes not.  Caden though, seems to get the best rolls and he beat us several times!  It’s been excellent for their math skills though, with pattern recognition, point values, and mental math. 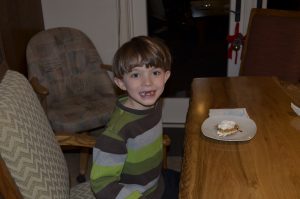 Keller and I had a nice date one weekend too.  We had tickets to a show in downtown Denver, grabbed lunch, and went to a movie.  It’s amazing how much you can do when it’s just two adults  😉

We did go four wheeling at Slaughterhouse once.  Because it had been warm, there wasn’t much snow on the trails.  We did find a couple of patches and the kids made snowballs and played with Opa. 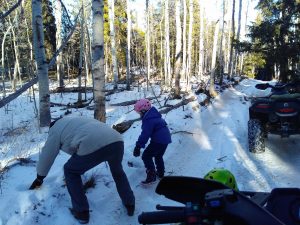 Lastly, the kids were given an iFly gift card from Oma and Opa for Christmas!  Caden was pretty confident, but Kamy was pretty timid.  Both kids had a great time!  The gift card gave them two, one minute flying sessions with an instructor.  What a neat experience! 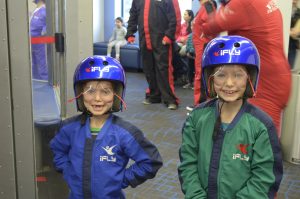